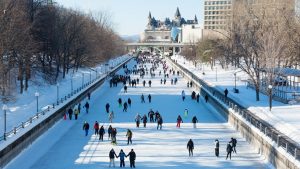 Rideau Canal Skate way is the worlds largest naturally frozen ice rink. The rink is approximately 5 miles, so the equivalent to 90 Olympic-sized skating rinks. Tourists and locals can skate through downtown Ottawa for free. 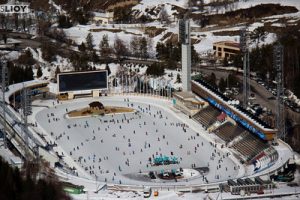 Medeo, or sometimes called Medeu is a throw back to the Soviet era. It is the highest skating rink in the world, sitting at 5,548 feet above sea level. Construction of the stadium began in the fall of 1949, and the first competition took place at the stadium on 4 February 1951. Medeo was the main arena of the 2012 Bandy World Championship. 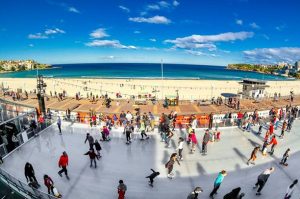 Ice skating at the beach. The Bondi ice rink, although small, (only 131ft in length) is your best chance for skating on sand and just a stones throw away from the surfers. It takes 21,100 gallons of water to create the rink each year. You can skate in the sunshine, or under the stars at night. The rink only opens for less than 1 month a year, normally during June or July. 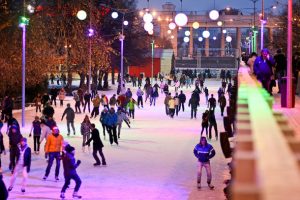 From wheat paste to stencil paintings to wall-size graffiti, you’ll see art works big and small in every corner of Gorky Park’s annual winter wonderland. The ice rink in Gorky Park is one of the largest ice rinks using artificial ice in Europe at 193,750 square feet and over 4 000 people may skate at the same time. The nighttime spectacle is truly amazing with over 30,000 LED lights used to illuminate the rink. 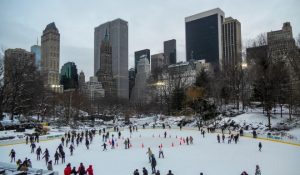 Wollman rink is not the most famous rick rink in New York, that would be the Rockefeller center, but why go to this little rink when Wollman rink is four times larger. Not only that but the skyline view of New York is what movie scenes are made from.

So which Ice Skating rink is your favorite?