Guide to ice hockey at Pyeongchang 2018

The men’s ice hockey tournament at PyeongChang will be the first since 1994 not to include players from the North American National Hockey League (NHL), but this could lead to a faster game as players from European leagues are used to the larger rink used in Olympic competition.

With 16 competition days and surpassed only by curling, ice hockey is the second longest-running event at PyeongChang 2018, concluding with the men’s final just hours before the Closing Ceremony.

The fast-paced contact sport is contested by six skating players on each side trying to get the puck into the opponents’ goal using sticks. Men’s ice hockey has been an Olympic event since 1920, with the women’s competition introduced in 1998. 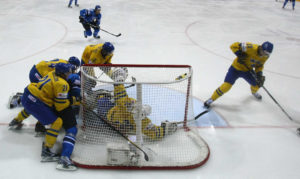 Each match is played over three 20-minute periods and the team with most goals at full-time wins. If the score is tied at full-time, a five-minute sudden-death overtime period is played (20 minutes in the gold-medal game). The game ends when the five/20 minutes have expired or when a goal is scored. Should no team score during that period, matches will be decided by a game-winning shot (GWS)in a penalty shootout. That is how Sweden beat Canada in the final of the 2017 IIHF World Championship.

The biggest difference between men’s and women’s ice hockey is that the women are not allowed to deliver body checks to an opponent.

A player who commits a foul is given a two-minute penalty and, making the most of these short periods is key to winning an ice hockey battle.

Should Canada repeat its men’s and women’s double gold medals from Vancouver 2010 and Sochi 2014, it would be the men’s tenth title and the women’s fifth, having won every Olympic competition since 2002.